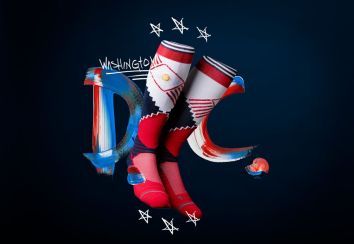 (Yahoo Sports) – The Major League Baseball All-Star game is in Washington D.C. this year, so what sort of style can you expect from the uniforms? A bit of classic Americana mixed with D.C. flair. The All-Star game and Home Run Derby are two of the growing number of events for which baseball players get to sport new styles — with Home Run Derby often looking a little more hip and the All-Star game going a bit more classic. The uniforms — complete with caps by New Era and socks by Stance, plus workday day jerseys — were unveiled Friday.

“A bit of classic Americana mixed with D.C. Flair.” Yeah no shit. The Home Run Derby has had its own jerseys for long as I can remember and every single one mixes in the “flair” of the host city/team. The Marlins used their logo as the last “a” in “National” and “American” last year and the Nationals are using the Capitol and Washington Monument for this year’s Derby. 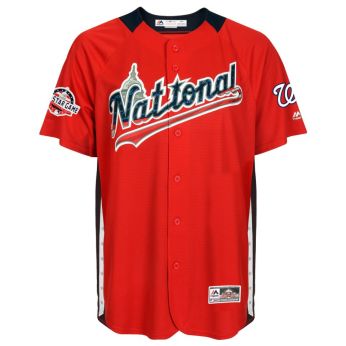 Hopefully, those collars aren’t real otherwise the American League’s may disappear when Chris Sale arrives in DC. But let’s talk about these socks. The design has Bryce Harper all over it.

Right off the bat: the Stance website has Bryce Harper socks! Further, Harper is a man known to dress well and keep a stylish haircut. Literally, google “Bryce Harper Style” and you’ll get pictures of Harper modeling, wearing a salmon-colored suit, the Body Issue Cover on ESPN The Magazine, and a lot of hair. And of course, there was the hair flip in last year’s All-Star Game.

Quintessential Harper here. Not only flashing the glove but the hair. Style and substance. He probably watched this and thought “how can I look even better? Let’s add some flash to the socks!” I wouldn’t be surprised to see Harper release a clothing line during the offseason. First, he signs a mega-deal (I’ll let you decide where) and then BOOM! Haperwear by Harper. The logo will pop up on the boards at Golden Knights games and Bryce slowly establishes dominance in another industry. The All-Star Game is just the beginning.

One thought on “Bryce Harper 1000% Designed the MLB All Star Game Socks, Right?”