Your weekly shot of hockey to go with your coffee

The Mets may not have made the playoffs but the Metropolitan Division is the hottest in hockey. Queens, be proud! Let’s get to it!

I try not to include the Flyers in the Heat Index since I have an update below. However, HOW COULD I NOT HAVE THEM AS THE HOTTEST TEAM IN HOCKEY!?!? NINE IN A ROW! I’m going to pause this screaming of joy until the actual Flyers Update section and turn this paragraph to the division as a whole. Great job, Metropolitan teams, great job. The top five teams account for five of the best seven records in the league. The Caps (5th in Met) would be 2nd in two of the other divisions and LEADING the Pacific. These teams are by far the most prolific offenses around. Considering how back-ordered this division’s play is, this elite status may not stay for that long, but let’s enjoy it while we can (and beat the crap out of each other later).

Runner Up: Calgary Flames (34 Pts) — Johnny Gaudreau returned last Sunday and wasted no time getting his scoring back on track. He has recorded two points in all four games and now leads the team in points.

Tampa Bay’s last won nine days ago in a shootout over the Caps and really last won against the Flyers the night before Thanksgiving. It’s been an interesting run for the Bolts and they have plenty of time to turn it around.

Runner Up: Winnipeg Jets (29 Pts) — Tough to be in this spot two weeks in a row. The goaltending has been terrible it sure as hell doesn’t help when you’re best young gun does this:

Tough night, rook. Also, terrible spin attempt by the color guy saying he trying to clear it behind the net. Kid loves scoring. Saw a loose puck and an open net and went for the kill. Can’t blame him for that. 99.9% of the time, he remembers it’s his own goal.

What to Watch For This Week:

Tonight, the Bruins travel up to their longtime nemeses: the Habs. Boston needs to bounce back off a three-game drought but Montreal is amazing at home. Tomorrow is actually a rather loaded night. Tough to pick just one game out of the bunch but the Blackhawks travel to MSG to face the Rangers.  Wednesday night see the Flyers go for ten in a row in Denver against the Av’s. Thursday night, the Wild travel to Nashville in one of the more intriguing matchups of the week between divisional opponents. Los Angeles comes East to Pittsburgh on Friday night in what should be a good East/West battle and we get the Blackhawks at the Blues on Saturday night.

And now, back to my giddiness. WHAT A WEEK! I hope the team has Steve Mason’s beer-tab covered for the next month because that man is on fire isn’t let anything by him. 42 saves against Florida on Tuesday and an incredible game on Thursday! I say that even though he allowed five goals! believe it or not, Mason is why the Flyers were still in position to rally out of both two-goal deficits. Saturday’s win was a great display of the boys coming together, controlling the games, and burying away the power play opportunities. Sunday proved that this team can play solid defense, even without a red-hot goalie like Mason between the pipes and without Ghost (get well soon, Shayne). Nothing against Stolarz, he played outstanding as well. Biggest props of all to the NHL’s First Star of the Week: Jake Voracek. 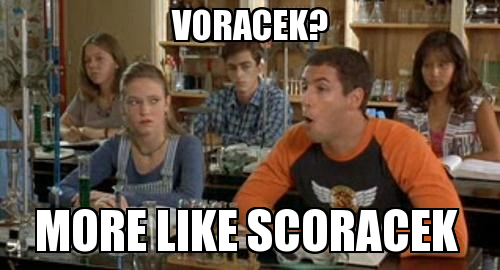 Disagree? Let me know in the comments