It might be a fridge-essential, a tailgate hit, the perfect beirut can, or an off-the-beaten-path brew.  Maybe it came from a large production company, a local microbrewery, or from over the oceans. The only common denominator is that it has to be beer. So crack open that cold one in your hand and listen in, maybe just maybe I’ll sway you towards your new favorite American pastime.

Beer of the Week: 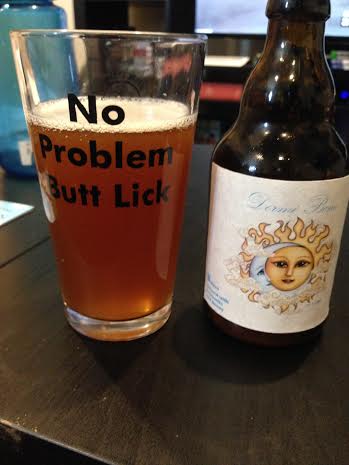 When G-Man came to me with an opportunity to do a unique beer corner I had no choice but to accept. His buddy Neal Conner has been home brewing for the past few years and after reading the beer corner, he wants to have one of his Delco Wooderworks brews to be spotlighted. To be honest I am very nervous about this because it is putting my beer tasting skills to the test. So Neal, regardless of what I say below, your beer is great!

The Dormi Bene Saison is a deliciously refreshing beer, especially given it’s 7.55% abv. It has a cloudy golden color, likely from the grist being mostly pale or pilsner malt.  However, the use of darker malts will produce a more reddish or auburn ale.  Popular spices used to create this refreshing beer often include orange zest, coriander or ginger. This Dormi Bene Saison has light notes of camomile and honey.

I didn’t know much about saisons but I reached out to an expert on the subject to take a quick lesson on this Belgian brew. Historically, saisons were brewed in farmhouses in a French speaking region of Belgium. Farmers would brew during the less active winter months and store their beers for the summer.  The main consumers of their beer would be their seasonal workers, nicknamed “saisoners”.  Due to their less identifiable traits and characteristics, saisons did not fall into one specific style of beer but rather were classified as refreshing summer ales.

Now that I have taken the time to educate myself (and you) on this Belgian pale ale, I am going to first admit that I, in fact, did not write most of this blog post at all, but rather collaborated with the vastly intelligent, Anna St. Hilaire, and second, I am now going to enjoy the rest of this Dormi Bene before I have to go dodge some balls.

If any readers or tweeters have any advice on beers to spotlight, give me a shout. Remember, America was built on beer and don’t let anyone tell you differently.

One thought on “The Up and Comer”