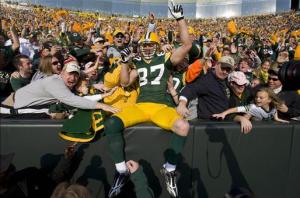 The best in the NFL? Jordy Nelson is pretty darn good.

Ok, the G-Man got his 15 minutes of fame by writing the Cold Hard Locks last week. But I’m back in the driver’s seat after a few weeks of computer issues, long hours at the office, and other various excuses. My renewed focus will end this silly amount of weekly ties and I can regain my place atop the mantle of the Cold Hard Locks.

Time for me to pull away. Just like the Patriots, I pick my best when the doubters start to gain traction.

San Diego hurt the luster on this game by getting clipped by Kansas City last weekend. But these are two of the best teams in the league with two big time MVP candidates in Peyton Manning and Philip Rivers. I expect the Chargers to lead at multiple points in this game and both defenses will get some sacks and big plays. But a late TD from Manning to a Thomas will end this great Thursday Night matchup.

The Lions are living on cloud nine and hearing how great they are. The Falcons have the football media beating down on them. Mike Smith is under fire but Matt Ryan and the Georgia Dome love Smith and all he did for this franchise. They win this one for their embattled coach and help humble a very good Detroit team. A fully healthy Megatron could change my opinion.

Can you feel the love?

G-Man – Lions. G-Man’s Note: This game is actually being played in LONDON, hence the 9:30 AM start. So I don’t know how much love the Falcons will feel at Wembley.

Both these teams aren’t very good and the Bucs are playing at home and I see them having a decent defensive game against a growing Minnesota offense.

This should be a defensive slugfest with the difference being a beat up Jets secondary against rising star Sammy Watkins and the underrated Robert Woods. The Bills are still in the playoff picture while Rex Ryan is desperately hanging on to his job.

The Bears are a dysfunctional mess of talent without a single leader. I am calling out Jay Cutler, Brandon Marshall, and Matt Forte here. The Pats feed off of other teams’ weaknesses and are playing incredibly well at the moment although the loss of Jerod Mayo is a dangerous injury. But Brady leads his boys while Cutler just plays quarterback. Take notes Jay, Tommy Terrific has 3 rings to show you.

Two division winners fading at the midpoint of the season. Two power running, smash mouth, hard hitting units who have strayed from their ways. Look for Charlotte to be rocking as Luke Kuechly and Cam Chancellor try to show the other up with big time hits. But Russell Wilson will eek one out against Cam Newton to right the ship after a disappointing few weeks.

Yeah I’m picking them hapless Jags. Plenty of heart and a swirling mix of unpredictable talent make for a dangerous Jacksonville crew who upset the Browns (no one has ever said that). Maybe we get some Johnny Football chants?!?! Denard Robinson and Allen Robinson will help Blake Bortles get the next era in Jacksonville football started.

The Bengals have looked bad since stepping on the field against the Patriots. The Ravens have looked like a balanced team with little holes across the roster. I like the Ravens and see them winning the division but in this league of parody the Bengals bounce back. A.J. Green returns from injury and the Bengals D clamps down to get back in the season.

The Texans have an average offense with no explosiveness. The Titans have a terrible offense, period. J.J Watt and the returning Jadeveon Clowney tee off on Charlie Whitehurst and Houston keeps their playoff hopes alive in this old school slug match.

The Chiefs are under the radar somehow and I bet even their victory over the Chargers still didn’t move the needle. But another victory over a surging Rams team will get some people talking. There is some talent in Kansas City and Andy Reid is doing a marvelous job putting it together. Should be a sack-filled affair in Arrowhead.

FLY EAGLES FLY! The Eagles have been disrespected and underrated all year. I am tired of hearing about how good Dallas is. I am tired of hearing about the Cardinals and Packers. The Eagles are 5-1 and have beaten better teams than most realize. Stop the lack of respect, the Cardinals will after this Sunday. Culture beats scheme so Chip’s boys will take this one from Arizona. The Super Bowl window is wide open in Philadelphia. 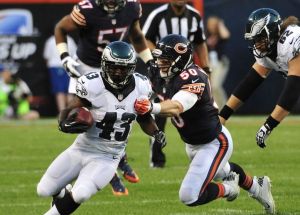 I’m torn on this game. The Steelers are at home and have some talent. And Big Ben and Antonio Brown make some great music in the passing game. But Andrew Luck is simply that good. Besides, the Colts defense has randomly gotten good and has the best 3rd down percentage in the league. Indy rolls in this one by more than expected.

A defensive slugfest begins in Cleveland and while Derrick Carr is the future for Oakland, the present isn’t pretty. Brian Hoyer is already hearing chatter about Johnny Football. I just see both defenses having a great game but the home team makes it happen late.

A late field goal is the difference. The Saints are terrible away from home but in the Superdome, don’t bet against them. I think the Packers will end up in the Super Bowl but for one week, New Orleans gets to celebrate an emotional victory. 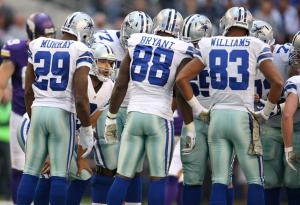