So nearly 110 games into the season, I FINALLY figured out what I wanted to do for my daily MLB post. It’ll start off right now as a recap of last night’s scores, similarly to the Hockey Roundup, but if you all think I should add something, let me know!

Indians Edge Rangers in 12, 4-3 – The Rangers were up 3-0 through the first two-and-a-half innings and despite a hiccup in the bottom of the 2nd, Yu Darvish pitched a gem for Texas striking out eight while only allowing one run and four hits over seven innings. Neftali Feliz couldn’t close the door as the Indians scored two runs in the ninth from a David Murphy home run and Michael Brantley blasted his 16th home run in the 12th inning for a walk-off in Cleveland.

Tigers blank Rockies 4-0 – Anibal Sanchez has been lights-out lately and today was no different. Sanchez struck out 12 while only allowing two hits over seven innings as the Tigers completed the sweep. Nothing against the Rockies, but the Tigers have been super-charged since trading for David Price, and Price hasn’t even made his Tigers debut yet.

Orioles hold off Mariners 1-0 – Not only did Nick Markakis provide the only run of the game by hitting his 9th home run of the season, he was also responsible for a third of the total hits in this game with three. To call this game a pitcher’s duel is an understatement. Sidenote: Mariners’ pitcher Hisashi Iwakuma pitched extremely well and was one out away from the rare eight inning complete game LOSS

Angels down Rays 7-5 – Mike Trout is so good he can turn off stadium lights a la Roy Hobbs. Trout didn’t blast the lights, but the power did go out at the Trop causing a 19-minute delay. Trout went 3-for-4 with two RBI, bringing his season total to 80. By taking two-of-three, the Angels handed the Rays their first series loss since early July.

Astros down Blue Jays 6-1 – AND THERE’S THE SWEEP! This series will be heavily discussed as the perfect example for why “the Astros will be so good in a couple years.” Today’s reason was a stellar performance from starting pitcher Scott Feldman. Feldman tossed a complete game and didn’t put up any dominating stats, but he did shut down one of the best offenses in the American League. Big props to the Astros offense for converting six runs out of their 12 baserunners today.

Royals edge A’s 4-2 – James Shields was lights out for KC going eight innings and only allowing two runs, both from the bat of Josh Reddick. The rest of the lineup didn’t even show up as the first six hitters for Oakland were a combine 0-for-21, yikes. Kansas City did quite well getting on base but even though they struggled plating those runners (3-7 RISP, 7 LOB), they still pulled out the win.

Nationals edge Phillies 4-0 – This was a great game until the eighth inning when the Phillies’ bullpen got wild, literally. I could go on forever about that or the ice the Phillies have been using for bats in the last two games but the credit goes to excellent starting pitching from Washington. Today, it was Stephen Strasburg and his ten strikeouts over seven innings–tough to win against that.

Giants blast Mets 9-0 – Madison Bumgarner also hit the ten-strikeout-plateau and was able to toss the complete game shutout while only allowing three baserunners. The real story today was Hunter Pence. Not only did Pence lead the charge with two homers, but he did that despite some creative hecklers: 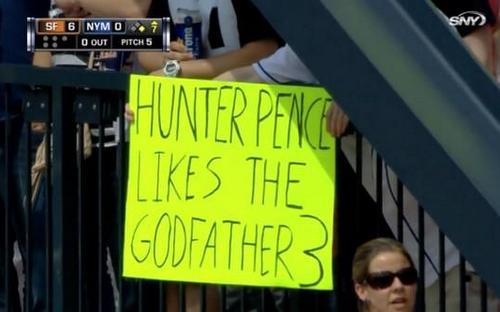 This may be my favorite (cbssports.com)

Reds beat Marlins 7-3 – The Reds 1-5 hitters–Billy Hamilton, Jay Bruce, Todd Frazier, Devin Mesoraco, and Ryan Ludwick–went a combined 12-for-20 with six RBI, that’s the type of production the front office wants to see. Really makes them feel better for shelling out tens-of-millions at them all. What’ll make them the happiest is if they can repeat this at home, give the fans a real show.

Cardinals rally over Brewers 3-2 – John Lackey made his Cardinals debut today and earned the win after going seven innings. The real shame is that Matt Garza didn’t end up with a win. Garza only allowed one hit on six innings of work. The Cardinals’ rally pulls them back within a game of the Brewers in the NL Central, the wildest pennant race of them all. Four teams all within five games of each other.

Cubs down Dodgers 7-3 – Remember when Josh Beckett threw that no-no against the Phillies a few months ago? Well Josh Beckett apparently doesn’t. While he strike out six Cubs in four innings, Beckett threw 94 pitches and allowed three runs, six hits, and three walks over those four innings. The Dodgers’ “problem” of having two many outfielders continues to be a struggle as Matt Kemp blasted his 13th homer of the year.

Padres edge Braves 4-3 in 10 – I shouldn’t complain about the Phillies being cold because the Braves are FROZEN. Evan Gattis does deserve credit for making plays especially being so soon-removed from the DL, but getting swept by the Padres has to be the team’s wake-up call. Washington now holds a 3.5 lead on Altanta and if things don’t turn around quick, the Nats could run away with the East by mid-August.

D-Backs edge Pirates 3-2 in 10 – The most-tame game of this series featured an excellent outing from Diamondbacks pitcher Trevor Cahill–seven strikeouts and only one earned over seven innings. Sad news for Pittsburgh though as Andrew McCutchen left the game in the 8th inning with a discomfort in his left side. The X-Rays came back negative and McCutchen is listed as “Day-To-Day.”

Yankees win wild one over Red Sox 8-7 – Ah the Yankees/Red Sox rivalry. Their four-hour wild showdowns are almost as American as baseball itself. This game came down to clutch hitting. For Boston, it was homers from Dustin Pedroia and David Oritz–who told the ESPN cameraman he’d hit a dinger in the 4th inning–while for the Yankees, it came from lead-off speedster Brett Gardner and the newly acquired Stephen Drew. The Pedroia/Ortiz combination fell two runs short of the Garnder/Drew duo as did the Sox. The next time the Yankees come to Boston will be for Derek Jeter’s final regular season series: September 26th-28th.