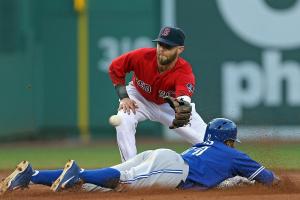 After stating they weren’t going to be sellers, the Boston Red Sox won four-straight games, and immediately lost the next five games. The Red Sox are 10.5 back of Baltimore in the AL East and will need a miracle to overcome an extremely competitive American League. However, expect Boston to stay with the non-selling mindset. Jon Lester has stated he wants to stay with Boston and the Red Sox can further build around him. Toronto comes into this series having won all three of their post-All Star Break series, including last week’s four-game-set against the Red Sox. The Jays have need their starters to pitch better and for the most part, they have–R.A. Dickey has split his first two starts while Marcos Stroman has won both of his starts. Toronto’s strength is their offense and it has been in full force during the second half as they have scored 51 runs in ten games–22 of which came against the Red Sox. 44 total runs came across the plate in last week’s four-game series; expect the high-scoring to continue at Fenway Park.