Question, under what circumstances would you find it necessary to attack a man whose name is “The White Bear?” Chances are you would never attempt such a daft act as the owner of that name would almost certainly exact revenge resulting in your death. Colorado Rockies pitcher Nick Masset found himself flirting with disaster 60.6 feet away from the mouth of the bear cave during yesterday’s game with the Atlanta Braves. Masset’s precarious situation occurred after the Braves and Rockies game devolved into an old fashioned junkyard game of dodge ball.

Trouble began to brew when in the bottom of the eighth when Colorado Left Fielder Cory Dickerson’s bat connected with Braves catcher Gerald Laird’s jaw. Laird was removed from the game and replaced by Evan Gattis A.K.A. El Oso Blanco (The White Bear). On the following pitch Dickerson was hit and braves pitcher, David Carpenter, was promptly ejected for retaliating against Dickerson. Following the incident, Rockies manager Walt Weiss was also ejected for charging the field and giving the umpire and Braves Manager Freddi Gonzalez what could be best be described as a “verbal reaming.” As the top of the 9th begins Masset takes the mound and finds himself staring down none other than El Oso Blanco. With ill blood flowing through his veins and and the opportunity to exact revenge, Masset’s first pitch to Gattis hits the White Bear on the arm. Masset is ejected and Gattis takes a leisurely stroll to 1st base and forgoes charging the mound. In all fairness, Gattis did the right thing and let the matter drop. However, there is a reason why Gattis earned such a formidable nickname and after a cold-cocked catcher, a foul mouthed manager, and being hit with a pitch I was hoping to see The White Bear pounce. Maybe it would have soothed the pain of watching the Braves go down 10-3 while sitting just one game out of 1st in the NL East. 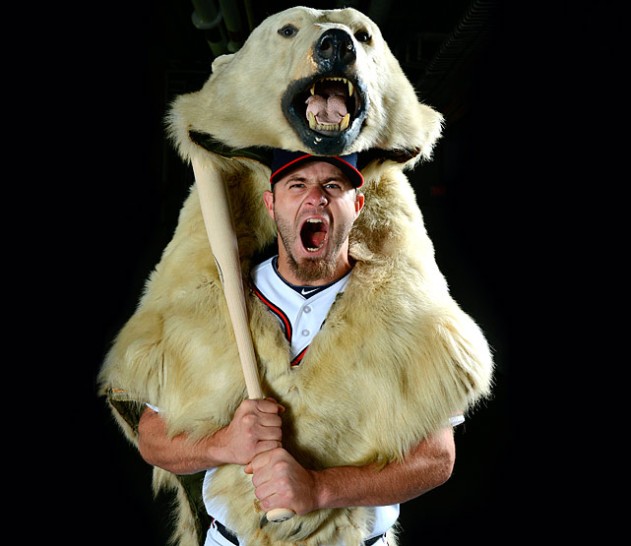