*I’ve been away from the Thunderblog for quite some time but after arduous and prolonged contract negotiations with upper management and the Senior Executive Producer, I am once again back in the driver’s seat of all things sports. Excited to be back home and can’t wait to continue the journey with the G-Man, the Iceman, JSB, and the rest of the Thundercrew! My first post is one I’ve wanted to write for quite some time and a opinion piece on one of sport’s legends. Boogity Boogity Boogity Boys, let’s go blogging!*

As the NFL draft fast approaches, a trend will continue this year: the lack of running backs drafted in the first round. Can you even name the top back in this year’s class? Most consider that to be Carlos Hyde out of Ohio State, although many outside of the state of Ohio and the Big Ten even know his name. He may go in the second round to a needy team but there aren’t even whispers about him or any other back slipping into the late-1st round. In this new-age, pass-happy NFL, the focus has shifted towards two-back systems and a focus on receivers, tight ends, and all-purpose speedsters. The age of the featured back is fading and that is a shame.

But there are still some out there. Many of us young bucks have fallen in love with some of football’s best. Adrian Peterson, LaDainian Tomlinson, Marshall Faulk, Marshawn Lynch, LeSean McCoy, and other runningbacks have excited fans for the past two decades. And they are all a pleasure to watch, fun to root for, and great assets to their respective teams. And there are the great workhorse backs of the past: Earl Campbell, Jim Brown, Gale Sayers, Eric Dickerson, O.J. Simpson, Walter Payton, Emmitt Smith, and others. All are great backs, most Hall of Famers, and helped their teams win games and win championships both in college and the NFL. But none are as good as the greatest to ever play the game. He was the complete package with no weakness and showed it every single time he touched the ball. And it all began during the 1988 season of college football. After rushing for only 600 yards while backing up future Hall of Famer Thurman Thomas as a sophomore, this Oklahoma State tailback exploded on to the scene his junior season, the single greatest season ever by a football player.

I wasn’t alive in 1988 and I don’t really remember him playing, but the one memory I have is watching eleven of my Eagles chasing him down the Vet’s field on a bitterly cold November day in the mid-90s. I was very young when my father took me to watch the Eagles battle the Lions. I only remember two things, it was goddamn cold and Barry Sanders. 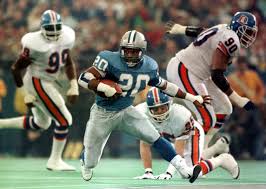 I was immediately hooked on this incredible running back and he was my favorite player. As I have grown older, I have respected him even more. But before I get to that, let’s talk about 1988. 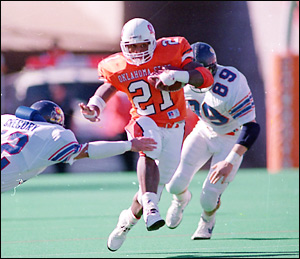 Sanders was a junior trying to replace a legend. His coaches and fellow players knew how good he could be, but the rest of the world hadn’t been introduced. He did so on the opening kickoff of the season, returning it 100 yards for a TD. And he never looked back. Sanders set 38 NCAA records that year and did so against both the bottom-feeders and the best: 189 yards against top-10 Nebraska, 215 yards against the top-10 Sooners to name just two. His worst game of a season consisted of 154 yards and 2 touchdowns on 25 carries. His statistics are truly awe-inspiring. He broke the 300 yard mark 4 times including his most stunning performance of the year with a career-high 332 yards on a career-high 44 carries against Texas Tech, and these weren’t garbage time yards as OK State pulled out the 45-42 victory on the back of Sanders’ 5 touchdown runs.

Continuing this tour-de-statistical force, Sanders had 2,850 yards from scrimmage in only 14 games. That record still stands today. He notched 39 touchdowns before his bowl game and scored at least twice in every game, including 4 TDs each in 7 games. And he didn’t simply do it via a bulk workload. He averaged 7.6 yards a carry on 373 carries. 7.6 yards is an astounding number. More impressively, he averaged 240 yards per game. To compare that, in 2011 only 9 TEAMS averaged more than that on the ground in FBS. 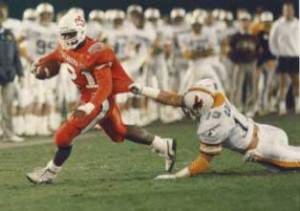 One of my favorite descriptions of Barry Sanders’ game comes from ESPN’s David Ubben. He said, “Sanders’ hips swiveled like no one else’s, and he embarrassed defenders on what seemed like every run. He was quicker than everyone, and when he reached the open field, he proved he was faster than everyone.” Some have recently compared LeSean “Shady” McCoy to Sanders with his ankle breaking moves in the open field and lightning quick cuts at the line. They are right to do so, but should end the comparisons there (at least for now).  McCoy does not have the power of Sanders and doesn’t face nearly the same defensive strategy. In the professionals, Sanders was just as sensational. He would, with very little doubt, hold many of the rushing records in the game, but he retired after only 10 playing seasons and without a Superbowl. This is why I respect Sanders. He left while on top and did so due to health reasons. The Hall-of-Famer isn’t struggling with many of the post-football injuries and alignments that many other retirees are dealing with.

If you get the chance, find some NFL Films movies of Barry or just head over to YouTube. Watch him run, no, glide across the field. He was a ghost cut from granite with no weakness and defines what it means to be a running back. He is the greatest of all-time, this Wichita Comet.