Out goes the snow and in comes the rain. Most of us here on the East Coast will be stuck inside today as we were all winter but it’s not as bad as you might think. Here’s your official THUNDERBLOG viewing guide of today’s sporting action.

NBC’s Game of the Week features two of the hottest teams in hockey. The Bruins have won 14 of their last 15 including a shutdown 3-0 victory over the Chicago Blackhawks this past Thursday. The Flyers bounced back from a two-game skid Friday night against the Maple Leafs and are looking to avenge the thrashing the Bruins gave them at home back on January 25th.

Michigan State should win this game but that was said about each of UConn’s opponents in their previous three NCAA Tournament games. The Elite Eight has been spectacular so far and this game won’t let us down.

Each of Kentucky’s games have gotten better and better in terms of quality Basketball and entertainment. In theory, this could be the best game of the Tournament. I’ll be watching this closely because the Wolverines are my bracket’s champions and even if they weren’t, the potential for three Big Ten schools in the Final Four gets me extremely excited.

I could not be more excited for baseball to be back. Do not tell me Opening Day was last week in Australia because that doesn’t count as “Opening Day.” It’s like a soft opening for a casino, it’s just giving you a taste of the greatness to come.

Phil Mickelson may have withdrawn but there are still some big name Tour-pros in the hunt. Matt Kuchar’s 65 yesterday has put him three strokes behind Steven Bowditch and plenty of others are within ten strokes of Bowditch. Most of them probably won’t be in contention as the day goes on but considering Adam Scott’s round last Sunday, I figured I should mention it. 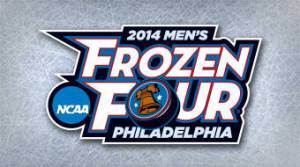 If you enjoy watching hockey and March Madness, go watch the NCAA Men’s Ice Hockey Tournament. Both of these games will determine who will join North Dakota and Union in the Frozen Four, which is at the Wells Fargo Center this year.

Have something else you’re watching today? Let us know in the comments below and we’ll add it up here.