As a red-blooded southerner I grew up with a fond love of collision sports, but a tragic (and laughable) fear of colder climates. This condition is one that is shared across Dixie and has stunted the growth of one of the world’s most beloved sports, Ice Hockey. To be honest, no one took the Thrashers seriously. Not even Atlantans who were too busy watching John Smoltz whittle his ERA to microscopic levels and wishing the Falcons hadn’t embarrassed themselves in their Superbowl appearance against the Broncos #neverforget. Hockey should be everything we love its aggressive, fast, and steeped in tradition. The Thrashers were short-lived and for the most part an uneventful addition to the NHL and the South. Or were they?

The Thrashers twelve years were just long enough to promote 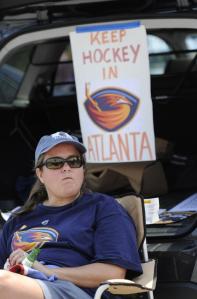 minimal interest and growth of hockey in Atlanta resulting in the construction of a handful of ice rinks. I am only aware of six rinks that can be considered part of the Atlanta metro area. However, the true gift of the Thrashers was the inspiration they gave to Atlanta’s youth. During their stay in Atlanta high school teams emerged for the first time. I’m sure this is hard to imagine for many of our readers, but nevertheless it is true. Scholastic hockey at both the high school and collegiate level is a novelty and in 2014 is still so small that a true Georgia state champion cannot be crowned at the end of the season. It is sad that a state that houses some of the nation’s premier athletic programs rarely find enough students who can lace up skates let alone play. However, I am proud to see my home state and city diversifying its athletics. Hockey is finally taking hold in the South and the rinks previously occupied by the Thrashers have been relinquished to the public and are now home to roughly a dozen high schools teams. Atlanta teens now have access to NHL quality facilities and have schools willing to support their passion.

Hockey in Atlanta did not die with the Thrashers, but rather it was born. So Thrashers I’m going to say something I never though I would say. I appreciate you and since you’ve been gone, Ice hockey has grown and now has a viable future in “Hotlanta.” Now all we need is the Hawks to quit sucking. Just one decent year would be nice.