Your daily shot of hockey to go with your coffee
Monday, March 10th, 2014

-Penguins edge Ducks in a shootout Friday night: A potential Cup Final preview that was led by the superstars of these two teams: Corey Perry and Evengi Malkin. Perry scored twice for his 33rd and 34th goals with Malkin had a goal and an assist. The unusual statistic was that the Penguins only took 17 shots, that usually spells disaster in Anaheim 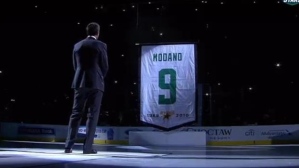 -Mike Modano’s #9 was retired in Dallas Saturday Night: One of the greatest American players, and one of my favorites. Modano led the Stars to a Stanley Cup in 1999 (don’t talk about that in Buffalo though). It was extremely fitting that this game was against the Wild, where the Stars played when Modano first came into the league. Once again, Tyler Seguin was the hero for Dallas, scoring a goal and assisting two as Eric Cole sniped the game-winner; Dallas downs Minnesota 4-3 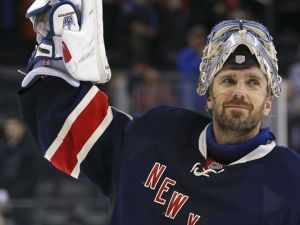 -Lundqvist wins #300: The King shut down Detroit. The Red Wings fired 30 shots and King Henrik stopped them all en route to his 6th shutout of the season and his 300th career victory. Chris Kreider has broken out of his slump with his 15th and 16th goals of the season as the Rangers blanked the Red Wings 3-0 yesterday. 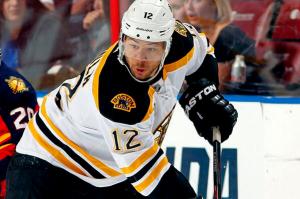 -Iginla nets #550: The Bruins completed a five-game season sweep of the Florida Panthers yesterday in a 5-2 win. Jerome Iginla scored his 20th goal of the year and his 550th of his career on Roberto Luongo. Luongo made a great effort saving 37 of 41 shots but Florida’s defense isn’t strong enough to reward that effort.

-The Devils played twice, Iceman has the full recaps: Friday in Detroit and Saturday at home against the Hurricanes

-The Flyers played in Toronto Saturday, I have the coverage of that game: Recap (coming soon)

Highlight of the Weekend:

The return of the HIGHLIGHT! Patrick Kane impressing his hometown crowd.

An unusually busy Monday in the ‘Chel with eight games tonight. Three games to watch out for are: Penguins at Capitals @ 7 (NHL Network), Blue Jackets at Stars @ 8:30, and Maple Leafs at Ducks @ 10. Penguins over Capitals: The Pens are riding high after defeating the Ducks at home. They’re coming into this game hotter than the Caps The only thing that could hold Pittsburgh back is that they’ve been out on the West coast so they could be tired from the travel. Oddly enough, this kicks off back-to-back home-and-homes for the Penguins. Get ready, El Presidente Numero Uno. Stars over Blue Jackets: the Stars kick the crap out of Eastern Conference opponents who come into Dallas. CBJ will certainly make it interesting but Seguin will come out on top against his former teammate Nathan Horton. Ducks over Maple Leafs: The Leafs can make Anaheim’s speed, but not the firepower.