Your daily shot of Olympic Hockey to go with your Vodka
February 19th, 2014

#1 Sweden drops #8 Slovenia 5-0 – I said it yesterday, King Henrik needs to be the King Henrik of 2006 and today, he was. Lundqvist stopped 19 of 19 shots which isn’t too hard to do against the talent Slovenia sports. Daniel Sedin finally got on the board today but the biggest plus for the Swedes was the fact that they doubled up Slovenia in shots 38-19. A high volume of shots and Lundqvist’s shut down efforts will be crucial for Sweden in the semifinals. 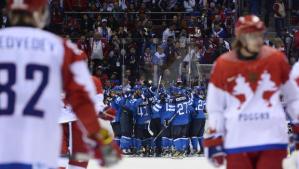 #4 Finland sends home #5 Russia 3-1 – TUUUUUUUUKKKKKKKKAAAAA! The Bruins goalie showed why Boston has the best defense in the NHL by stopping 37 of 38 Russian shots. The puzzling decision from Russia was why they decided to start Seymon Varlamov over Sergei Bobrovski. Bob did play yesterday and Varlamov played well in group play, but Bobrovski is a proven goaltender (2013 Veniza Trophy Winner). The most disappointing part of the Russian letdown was the disappearance of Alex Ovechkin and Evgeni Malkin offensively. They scored Russia’s first two goals in the tournament and didn’t play well afterwards. Honestly though, this result doesn’t surprise me.

Sweden and Finland face off in the first semifinal game at 7am EST on Friday morning.

#3 Canada edges #11 Latvia 2-1 – What. A. Game. The Latvians played incredibly well in this game and all of the credit needs to go to their goaltender Kristers Gudlevskis; the Tampa Bay prospect made 55 saves on 57 Canadian shots. Ultimately, the Canadians pulled the win on a Shea Weber SNIPE a power play goal from the point. It was the only real mistake the Latvians made: letting Canada go on the man advantage. Team Canada lost John Tavares today to a leg injury which could make a difference in the semis against…….. AMERICA!!!!!!!

#2 USA blasts #7 Czech Republic 5-2 – Iceman did a phenomenal job live-tweeting this game as he will once again on Friday against Canada. Follow him on Twitter @gregmustillo. The United States did a great job getting on the Czechs early. While they matchup the USA’s early goal, the two goals by the USA late in the first period is what did the Czech Republic in. The USA did a great job scoring in 5-on-5 situations, proving they don’t necessarily need the power play to score. They’ll need that against Canada.

Canada and the United State will renew their rivalry on Friday at noon EST.