Your daily shot of Olympic Hockey to go with your Vodka
February 15th, 2014

Slovenia upsets Slovakia 3-1 – This a pretty evenly matched game. The difference was that Slovenia was able to put together a string of goals in the third period while Slovakia missed a string of opportunities. Slovakia had three power play opportunities in the second period and couldn’t score on any of them. By the time they finally converted a power play, they were already losing and there were 18 seconds left in the game. With the loss, Slovakia locks into fourth place in Group A.

USA edges Russia 3-2 (SO) – AMERICA!!!! By now, I’m sure you’ve all seen T.J. Oshie’s shootout winner but this game’s real credit needs to given to Jonathan Quick. He made a bunch of crucial saves down the stretch as well as in the shootout. What you probably didn’t hear about was that overtime almost didn’t happen. In the third period, Russia’s Fyodor Tyutin intercepted a bad clear attempt by JVR and sniped a goal top-shelf on Quick. It looked like one of the Russians tipped the puck so the referees reviewed the goal. In the replay, it was shown there was no tip, but the net had been dislodged, no goal. The USA got a lucky break but it’s great to see them pull out the win and boost their confidence. Ultimately, the team chemistry of the United States is certainly there and has propelled them to these two wins.

The USA takes sole possession of first in the group with 5 Points, Russia sits in second with 4, Slovenia moves into third with 3, and Slovakia falls to fourth with 0. The USA and Slovenia face off tomorrow morning at 7:30, the winner most likely takes first. If Slovenia wins in OT and Russia defeats Slovakia (also at 7:30am) in regulation, the Russians would take first place.

Switzerland blanks the Czech Republic 1-0 – Jonas Hiller shut the Czechs down. Plain and simple. The Czechs went on five power plays and couldn’t convert any of them mainly due to their goaltender. The Swiss don’t have as many NHLers as the Czech Republic so you would expect them to lose the faceoff battle 33-24. Given that and the NHL advantage you would think the Czechs would outshoot the Swiss, but the two teams tied 26-26. 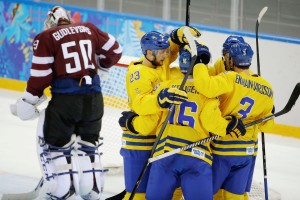 Sweden rallies over Latvia 5-3 – I tweeted out that the Swedes looked lost without Zetterberg after the Latvians took an improbable 2-1 lead in the second period. Team Sweden’s PR guy must have seen that because they turned it around by tying up about a minute and a half later. The reality of it was that Latvia’s goalie Kristers Gudlevskis played outstanding in the first period stopping 11 of 12 shots, but the veteran fell to the remaining NHL players in Sweden’s lineup in the second and third.

Sweden had already locked in first place coming into today but finishes group play with 9 points. Because the USA/Russia game went to OT, the Swedes will be at least the second seed in the medal round. Switzerland take 2nd place with 6 points and a goal differential of +1. Right now, the Swiss are still alive for the fourth seed and first round bye but they most likely won’t get it as Canada and Finland each have differentials of +9 and +8, respectively. The Czechs finish in third with 3 points and the Latvians finish in fourth with 0 points.

The final four games of group play will be tomorrow. At 3am, Austria and Norway take the ice to determine third and fourth place in Group B. If the Norwegian team that played Canada shows up, expect Norway to win. If the Norwegian team that played Finland shows up, expect otherwise. At 7:30am, the Russians take on the Slovakians on USA. Russia will want to bounce back after today while Slovakia will want to make up for their abysmal play to start the tournament. Ultimately, the fire power in the Russian lineup will down the Slovakians in submission and potentially, the twelfth seed in medal play. Also at 7:30 on NBCSN, the USA plays Slovenia. As I mentioned above, the winner will most likely take first in Group A. The USA should win this game considering their very convincing two wins but the Slovenians, the surprise of tournament, will make interesting. If T.J. Oshie’s shootout play indicates anything, the USA has full arsenal of guys with the ability to put the team on his back. At noon on NBCSN, Team Canada plays Team Finland for first place in Group B. This will be an extremely exciting fun game to watch but the high-powered NHL All Star team that is Team Canada will be too much for Antti Niemi and/or Tuukka Rask, the Fin’s goalies. Both are Cup winners (Rask wasn’t the main goalie for the Bruins in 2011 though) and have the abilities to stonewall the Canadians, but the defensive cores aren’t nearly the same as their NHL counterparts. Canada takes the group and the top seed in the Medal Round.