Your morning shot of hockey to go with your coffee (or evening here in America)
February 13th, 2014

Russia downs Slovenia 5-2 – Ovechkin and Malkin struck early for the Russians but the Slovenians were able to respond twice as they trailed 3-2 through two periods. Ultimately, the Russians’ high-powered offense added two more goals in the third period and spectacular play from Seymon Varlamov propelled Team Russia to their first win of the tournament. 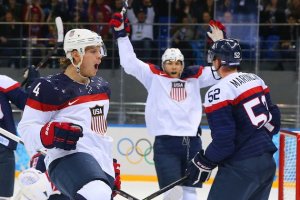 USA dominates Slovakia 7-1 – America, Puck Yeah! Forward David Backes said it best after the game talking about the USA’s slow start in the first period, but John Carlson’s goal was a SNIPE! The USA was able to respond after Slovakia tied it up not even a minute into the second period but scoring six unanswered. The USA takes first place in Group A due to goal differential but USA/Russia is this Saturday at 7:30am.

Finland doubles up Austria 8-4 – The Fins rocking the Austrians isn’t surprising but a sign of concern for Finland may be that their goalie Tuukka Rask let up four goals on twenty shots. Austrian goaltender Bernhard Starkbaum saved 44 of 52 shots while F Michael Grabner of the New York Islanders had a hat-trick. Flyers Rookie F Michael Raffl had assists on two of Grabner’s three goals. Finland takes first place through one game, due to goal differential because…

Canada defeats Norway 3-1 after slow start – This game was scoreless through one period, as it was in the opening game of the Men’s Tournament in Vancouver between these two teams. Just like four years ago, Team Canada took over in the second period. Shea Weber did what Shea Weber does best: sniping through everyone on the ice from the blue line. Seriously, this shot was a missile. Drew Doughty led the way points-wise for the Canadians as he would set up Jamie Benn’s goal and later score one himself. The Bruins’ Patrice Bergeron also had two points, both assists. 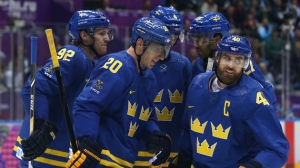 Sweden downs Czech Republic 4-2 – King Henrik arrived in Sochi on a mission for gold and he started it by stopping 27 of 29 shots yesterday. If you haven’t heard how talented the Swedes are, I’ll put it this way, Daniel Alfredsson is on their third line. This game will end up being the tiebreaker for Group C but it wasn’t a surprise that Sweden won this game. They took first place through one game, due to goal differential because…

Switzerland edges Latvia 1-0 – The Swiss have a surprisingly talented roster that features Anaheim Ducks G Jonas Hiller. Hiller posted a shutout on 21 shots while Nashville’s Simon Moser scored the game’s only goal which was assisted by Flyers D Mark Streit.

Four games on Valentine’s Day coming from Groups B and C. At 3am EST, Lativa takes on the Czech Republic. The Czechs have a deeper lineup so expect to them to emerge victorious. At 7:30am, Sweden and Switzerland face off. The Swedes have the deepest lineup in Group C but the Swiss could make this game interesting. Regardless, Sweden will come out on top. Both of Group B’s games drop the puck at noon EST as Canada faces Austria and Norway plays Finland. Canada’s toughest challenge will come in their final game against Finland but the Canadians want to prove that their slow start today was a fluke. This could get ugly for the Austrians if they’re not careful. The Fins will win their game over Norway but the Norwegians want to rebound after a close loss today to Canada. It will be the most exciting game of the day.