Welcome to the first installment of the Thunderdome’s NBA Lightning Strike. Just like the G-Man’s NHL Roundup, Lightning Strike is just a quick preview of one of many NBA games, story-lines, or moments occurring on that day. Whether you are a diehard NBA fan or someone who just wants to get their feet wet in basketball action, Lightning Strike is a quick and easy read. 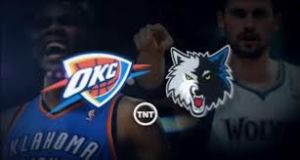 The big news in the NBA is superstar PG Chris Paul going down with a back injury for the next month. Oh and the random rumor that the Knicks and Clippers have thought about a Griffin-for-Melo deal. But how about a great game tonight! The Thunder are also without their star point guard as Russell Westbrook is out until the All-Star break and have slipped of late. Trying to avoid their first 3-game losing streak of the season, they battle the ‘Wolves up in frigid Minnesota. The Timberwolves are flying under the radar this season, but are only two games back from the 8th playoff spot. Led by the perennially disrespected Kevin Love (26.3 PPG, 13.5 RPG), the Wolves are second in the Association in scoring per game. Of course the Thunder have Kevin Durant, the best player west of the Mississippi, who is averaging 28.6 PPG and trying to pick up the slack left by Westbrook’s absence. 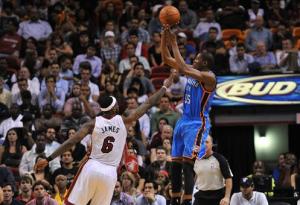 Ibaka vs Love when the Timberwolves have the ball.

Serge Ibaka is one of the game’s best shot-blockers and becoming a more dynamic scorer each year. He is going toe-to-toe with one of the game’s most versatile forwards as Kevin Love can bang in the post, hit the elbow jumper, and step back and bury them behind the arch. Ibaka is going to have to be on point tonight when the Timberwolves have the ball because Love will find his shots. More so, if Love is hitting from outside, this will draw Ibaka away from the basket, giving more room for Kevin Martin, Ricky Rubio, and J.J. Barea to cut into the lane, and open up opportunities for the heating-up Nikola Pekovic for room down low. If Ibaka can’t contain Love, the Thunder will be looking at a 3-game skid.

Reggie Jackson has filled in nicely for Westbrook, but let’s not kid ourselves, the drop-off is large. Other than Durant, only Jeremy Lamb is averaging 12 points since Russell went down. Jackson needs to step up. Ricky Rubio is a dynamic point guard offensively who can make plays many don’t even see. Jackson will have his hands full but he can take advantage of Rubio defensively, opening the court up for Sefalosha, Lamb, and Durant. This matchup may end up being the deciding factor. 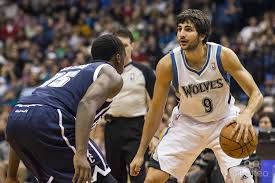 The game will be close and Durant will drop 30 points, but a double-double, 20 and 10 night from Kevin Love, plus double-digit assists from Rubio will push the Wolves ahead in a huge home win.