Hope you all had a great holiday! Bowl Season Continues On:

HAWAII BOWL: Oregon State downs Boise State 38-28 – Well I did say “Broncos will try to make this one about the turnovers” and they did pick off Sean Mannion once and held him to only one touchdown and only 259 passing yards, but the Broncos of Boise State dropped the ball, twice. They fumbled it two times to Oregon State’s one interception thrown. One of those fumbles was returned for a 70-yard touchdown. It’s tough to win that way, even when you out-gain your opponent by 84 yards. While he didn’t break out for a ton of yards, Oregon State’s Brandin Cooks had eight receptions for 60 yards and the only receiving touchdown of the game. Those are some killer PPR stats for all you fantasy owners looking to scout some good rookies for next year, eh Iceman? JSB had “Potato State” in this one and has lost his lead!

Here are the Standings through Day Two:

Don’t forget to vote for who you think will win each game below the previews! 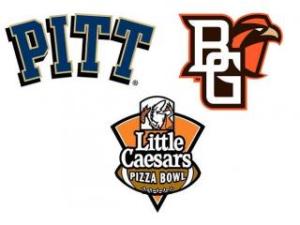 Ah, the first bowl to feature my favorite FBS conference, the Atlantic Coast Conference, and it’s one of the newbies! Pitt’s a confusing team because the half the teams they’ve beaten are bowl-bound, including ACC runner-up Duke and Notre Dame. At the same time, they got obliterated by Florida State to start the season at home and have the 105th ranked offense averaging 351.8 yards per game. Talk about a defensive team I guess. Bowling Green is a team you probably may have heard of because they were the “security guard” for the BCS’ party, as you’ll see why with our next game. The Mid-American Conference Champions’ only conference loss came from a late TD by the Rockets of Toledo while their other loses were to Mississippi State and Indiana. Other than those games, these guys are explosive. They have scored 40+ in six games, including in four of their last five and ruined a Heisman hopeful’s chances by holding him to only 219 yards in the MAC Championship Game. And by the way, their offense is ranked 24th in the nation averaging 472.5 yards per game. That’s all JSB and I need to believe in Bowling “Verde” as the Senior EP likes to call them, while Matty D is going with Pitt.

Really NIU is 8-1 in the MAC because they lost to Bowling Green in the Championship Game. As I referred to above, Jordan Lynch, NIU’s QB and Heisman Trophy Finalist, was held to only 219 yards passing with 1 passing TD and two picks and 126 yards on the ground with 2 rushing touchdowns. Lynch is going to want to make up for that. He leads the fifth-best offense in terms of total yardage and fourth-best in terms of rushing into this one against a team that has “the toughest defense I’ve ever faced” according to another Heisman hopeful but not a finalist, Derek Carr. The Aggie D did let Carr throw for 404 yards but managed to pick him off twice in the Mountain West Championship Game, which were his 6th and 7th interceptions thrown this season. Utah State’s defense also ranks in the top-10 in the FBS in both points allowed (17.3) and rushing yards allowed (107.3) so the Aggies will look to slow down Lynch, the FBS’s single-season record holder for rushing yards by a quarterback, as well running back Cameron Stingily, who rushed for 1081 yards and nine touchdowns. All three of us believe the Heisman’s 2nd Runner Up (3rd Place) Jordan Lynch and the Huskies of Northern Illinois.

See you tomorrow for Day Five!